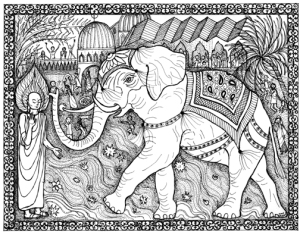 The Story of Nalagiri is one of the better-known legends in the Buddhist tradition. Scenes of the Buddha taming a rampaging elephant with the power of his love appear in Buddhist art across southeast Asia, while the city of Rajgir, where the story takes place, has become a site of pilgrimage.

In Theravada Buddhism, besides the collected discourses of the Buddha, there are two well-known story traditions: the Jataka tales, presented as the Buddha’s recollections of his previous lives; and the Buddhist Legends, semi-miraculous accounts from the Buddha’s life as a wandering teacher in Northeast India, some 2500 years ago.

The collected discourses are referred to as The Pali Canon. Several sources exist for The Legend of Nalagari both within the Pali Canon and in the non-canonical works. It appears in the Vinaya (the Monastic Code of Discipline), The Questions of King Milinda, and the Udana Commentary. It also provides the frame story for one of the Jataka tales, Cullahamsa Jataka, which is Jataka no. 533, in which the Buddha and his cousin Ananda are born as swans and Ananda offers his life in exchange for that of his friend.

Once there was a great elephant named Nalagiri. When he was a young calf, he was captured and brought to the city to be a tusker in the king’s army. King Bimbisara had no elephant in his service equal to Nalagiri, with his massive shoulders, his gleaming tusks, and his ferocious strength. Enraged, he was unstoppable, trampling and crushing everything that lay in his path. All the king’s enemies trembled at the sight of Nalagiri, and, on rare occasions, when he was paraded through the streets of the city, decked in glittering brocade, the people trembled too. They hung back from the roadside or watched from the safety of rooftops.

Once Nalagiri was startled by a dog barking in an alleyway and began stampeding through the streets. His great feet fell like thunderbolts, shook the earth and raised a cloud of dust. Nalagiri was frightened, and ran to ease his panic, but the people, seeing the great elephant on the loose, fled in terror for their lives. When Nalagiri saw them running, he lifted his trunk and trumpeted, swung his tusks from side to side, and knew that he inspired fear. Thereafter his legs were bound with chains and his keepers took to giving him eight measures of palm-wine every day. And so, he spent his hours in a bewildered haze like a smoldering fire that only needs a bit of fuel to set it ablaze.

At that time the Buddha often dwelt at Veluvane (Bamboo Grove), a sanctuary offered to him by King Bimbisara, which lay at the foot of the mountain known as Vulture’s Peak. The Buddha and the monks would go on alms round into the city nearby, and there they received offerings from the king and the people. The Buddha had already been teaching for many years. He had many supporters and followers.

The Buddha had two cousins, both members of the ordained Sangha. One was Ananda, the Buddha’s faithful attendant. The other was Devadatta, who had easily attained the iddhi, the psychic powers, soon after becoming a monk, and believed himself to be equal to the Buddha in attainment. When he saw how the Buddha was honored by princes and kings, he too wished to receive this kind of honor. Three times he asked the Buddha to give the community of the monks into his care. Twice the Buddha refused. The third time he said: “Devadatta, I will not give over the Sangha, not even to my worthy disciples, Sariputta and Mogallana, and certainly not you.”

Devadatta went away, humiliated and angry. He enlisted the support of Prince Ajatasattu, the son of King Bimbisara, to bring about the death of the Buddha. One night Devadatta gained admittance to the king’s elephant stables. He bargained with Nalagiri’s keepers, promising them gold and honor, if they would double the daily ration of palm-wine they gave to Nalagiri.

“Eight measures is what you give him? Well, then, give him sixteen! And when he has drunk it all, then open the doors of the stable, unbind his chains, and stick him and prick him with your goads and spears until mad with anger he charges into the road onto the path of the Buddha.”

The elephant keepers nodded, their eyes caught by the glint of gold shining in the torchlight. But when Devadatta had gone, one of the keepers slipped away in the shadows and went to Veluvane to warn the Buddha. The Buddha knew of Devadatta’s plan, and he had no fear. The monks, however, counseled him not to go on alms round. The Buddha said, “Do not fear. A Buddha cannot be killed in such a way.”

The news spread throughout the city that the next morning the Buddha would tame the king’s great tusker, Nalagiri. Others announced with satisfaction that the great elephant would trample that recluse mendicant, the Sakyan, to death.

When morning came, the people had gathered on rooftops to watch the spectacle. The streets of Rajagaha were empty, except for the odd cart, laden with fruit or garlands, hastily abandoned by its owner. Dogs roamed and crows settled expectantly in the banyan trees. The morning air was heavy with anticipation.

In the elephant stables, Nalagiri’s keepers finished emptying the sixteen measures of palm wine into his drinking trough. Nalagiri began to drink, sucking up the liquid in his trunk and pouring it into his open mouth. As he drank, his keepers moved quietly about, opening the doors of the stable, unfastening the chains that bound the elephant’s legs, and selecting their sharpest goads and spears.

The Buddha was just entering the city as Nalagiri raised his head, sensing something different in his surroundings. Through the open doors of the stable the smells of the city drifted in…..the smoke of cooking fires, the sweet smell of jasmine, the dusty street. Nalagiri lifted one foot, then another, and slowly turned himself about. He blinked at the sight of so much daylight. He raised his trunk to take in all the smells. “Where were his keepers? Where was his mahout? Why were the doors open?”

Suddenly, he felt a jab on his left hind leg, then on his right. Pain shot through him. As he turned his head he was besieged with stabbings on all sides. He heaved his massive form from one side of the stall to the other, crushing two of the keepers, breaking the legs of a third. Then he charged into the street, lifting his great trunk and trumpeting.

The first thing he saw was the garland-seller’s cart, with its wreaths of jasmine. Nalagiri reached out and wrapped his trunk around the shaft, seizing the cart, turning it upside down, smashing the wooden frame, and trampling the flowers. Next he came upon a row of neem trees. One by one, with astonishing speed, Nalagiri uprooted the trees and heaved them to the ground. Now the dogs came barking behind him. Careening wildly from one side of the street to the other, the charging elephant crashed into tea stalls, and knocked down walls, bellowing with rage and hurt and fear.

At the city gates the Buddha and the monks heard the shouting. The monks tried to persuade the Buddha to change his course. “Bhadante,” they said, “Turn back, we beg you. Remove yourself from the path of this fearsome beast.” The Buddha smiled and motioned them to stand back.

Everyone saw the elephant approaching, swaying madly from one side of the road to the other, slamming his weight into market stalls and house-fronts. The Buddha’s attendant, Ananda, placed himself before his teacher. The Buddha motioned for him to step back. Ananda nodded and stepped aside, but then seeing the elephant coming closer, he placed himself in the path of the raging creature. Again the Buddha ordered him to stand aside. A second time Ananda obeyed, but, unwilling for harm to come to his teacher, a third time he stepped in front of the Buddha. Then the Buddha lifted Ananda into the air and set him down behind the crowd of monks.

Less than a hundred yards down the road, the Buddha saw the charging elephant. The Buddha called up the force of loving-kindness from deep within himself, radiating his boundless heart toward Nalagiri.

The elephant felt something brush against him like a cool wind. The Buddha radiated the oceanic power of loving-kindness toward Nalagiri. Nalagiri’s whole life began to unfold before him….his days in the forest as a young calf, playing in rivers and lakes, wandering with his mother and aunt through groves of Sal trees, his capture by the king’s elephant-keepers, the training he underwent to become a tusker and a slayer of men, his loneliness in the elephant stables, his fear and pain. Like two waves meeting, the force of the Buddha’s loving-kindness collided with the moving mass of the raging elephant. Nalagiri felt it like a wave breaking against his brow, and his perception cleared. He slowed his charge to a walk. Before him he saw the shimmering form of a monk in saffron robes. He heard the monk address him, “Ambho, Nalagiri, my friend, come.”

Nalagiri stepped forward, shaking his elephant ears. He bowed his head before the Buddha and knelt upon the ground, bringing his massive weight slowly to the earth. Then he lifted his long, curling trunk and, forming a cup at the end of it, he scooped up a handful of dust from the road and sprinkled it on the bare feet of the monk.

The Buddha reached forward with his right hand and laid it on the elephant’s brow. “Ambho, Nalagiri,” he said. “You are safe now, my friend.”

“Your new name, Nalagiri,” said the Buddha, “is Dhanapalako….Guardian of the Treasure. And the treasure, my friend, is your own loving heart.”